You are here: Home > Los Angeles based Nuke Artist 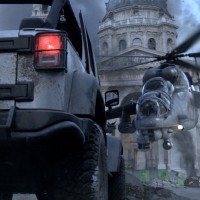 I was asked recently by a client what my day job was.  I can say first and foremost, I am a Los Angeles Nuke Artist.  Compositing has been my career since 2001.  Originally on After Effects, then in 2003 moving over to Flame.  I was a flame artist in NYC for the next 6 years, working on Advertising and Broadcast.  In 2006 I worked on my first film “”Jumper” Staring Hayden Christensen.  That was an amazing experience which ultimately brought me out to Los Angeles.

In 2007 I stated working at Rhythm & Hues studios in their film division.  At R+H I had the pleasure of working as a Sr Compositor and Compositing Lead.  I contributed on several films including “Golden Compass” ,  and “The Incredible Hulk“.  R+H was an amazing experience where I was able to mix my speed from commercial work with the quality of working in feature VFX.

After I left R+H it was off to Sony Imageworks in Culver City, where I had the opportunity to work on Alice in Wonderland, and The Amazing Spider-man.  Both Amazing projects and lots of fun.

Since then, most feature work has moved international, so I have been focusing on Commercials, Music videos and Games.  I’ve had the pleasure of working at some amazing shops including Digital Domain, Mirada, and MPC.  Commercials are great because they are just as challenging as a large feature film, but often have a much tighter deadline.  This creates an exciting work environment. Feel free to take a look at my work below.

Clients highlighted on my commercial reel include

If you are interested in booking me for any consulting or compositing, please feel free to contact me at peter at petersid dot com.

View all posts by petersid →

This site uses Akismet to reduce spam. Learn how your comment data is processed.

Magic Quotes is off.